To be effective, a strategy needs buy-in from health and local government leaders and other stakeholders and its ambition therefore needs to match what they are prepared to accept. It will also need to work with the kind of changes they understand and are used to.  What follows, is an attempt to outline an alternative to the version of the strategy that I produced in March, which might be more acceptable to health and local government leaders.

This outline works with the grain of the existing approach within health to move from acute to community-based provision. This is currently largely based around Primary Care Networks (PCNs) and the introduction of new roles such as social prescribers. This outline strategy extends that to integrate primary care, community and mental health and social care at a PCN geography. Over time, there would be knock-on effects to other parts of the health system such as reduction in the provision of acute care but they could be delayed until the outcomes of the initial integration were clear.

The second part of the approach is something frequently mentioned but less often comprehensively implemented. That is, to have an equal partnership with patients and the public. By combining these two elements, local integrated care and fully involving patients and the public, a qualitatively different whole-person-centred model of care could be developed. This should lead to two further changes: new pathways of care and a gradual rebalancing towards prevention rather than treatment. That is all very abstract, so what might an example look like in practice.

The GP practices and PCNs would work with their patient participation groups (PPGs) to set up forums so that patients could input into the development as equal partners. That could well include a PPG representative on the PCN board. The integration of services at the PCN level would involve considerable practical and political problems and take several years to implement. During this time, the involvement of patients in managing their own health would be developed. It would include advice and information on healthy living. Peer support schemes would be encouraged and supported in areas such as mental health, diabetes and the management of long-term conditions. These could take many different forms, from small, social walking or dieting clubs to larger scale and more organised support with a system for training and allocating peers to those needing help.  These would often be linked into wider networks of such peer support (which are likely to be currently organised at a wider, such as local authority, level).

These initiatives would be facilitated and enhanced by actions at a wider geography such as local authority-led public health campaigns and work to address the social determinants of health. There would be greater support of the voluntary sector, enabling it to play an increasing role in prevention. Mechanisms would be set up to encourage learning between PCNs such as learning events and online communities of practice.

There would also need to be a conscious redesign of pathways of care. This would build on some of the changes already going on, such as with social prescribers. For instance, where a person had a number of interlinked physical and mental health problems, a 10 minute slot with the GP would be unlikely to get to the bottom of it. Whilst a much longer appointment with a social prescriber could be more useful, that could miss out on the sort of multidisciplinary input necessary to recognise and address the interlinked problems. New ways of providing such input would therefore need to be sought.

Such approaches would in their own right start to move towards prevention rather than treatment but hopefully over time they would also start to reduce demand on GPs and other health professionals. This could free up resources to enable more professional preventative work such as screening, health checks and earlier intervention.

There would be much more detail underpinning this broad approach. Some suggestions are included in the attached diagram, such as more patient control over their health records, the increasing use of artificial intelligence supported diagnostics and the use of high quality IT links with secondary care to enable local surgeries to be used as satellite hubs, for instance for outpatient appointments. No doubt there would be many other initiatives sparked from the joint input of patients and health professionals. 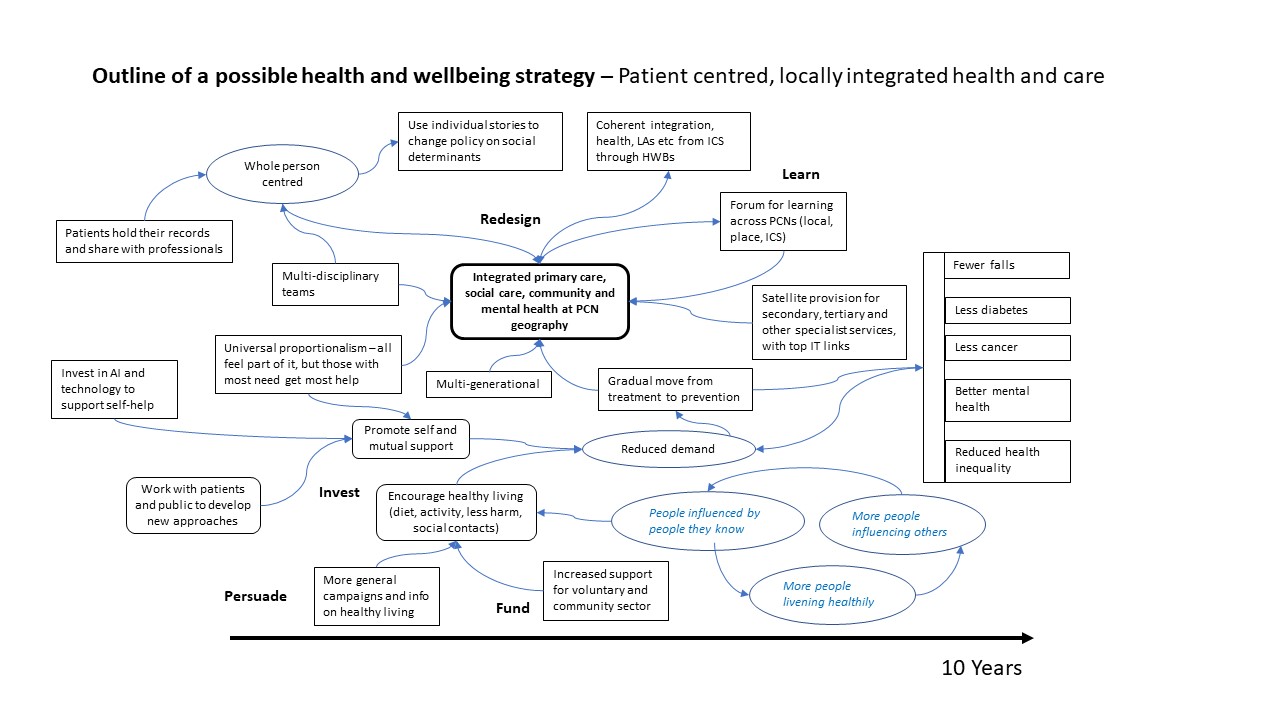 I will now try to address some of the possible objections to this outline strategy.

This is being presented as something more practical but still seems pretty ambitious.

This is quite ambitious and there is no guarantee of success. However, most of the elements already appear in local and national strategies so the ambition is, in theory, already there.

If these things are already in existing strategies what is this proposal adding that is new?

This proposal brings together things which are currently presented independently and recognises the interrelationships between them and positive feedback loops such as patient involvement reducing demand, freeing up professionals’ time for more preventive activity.

If those elements were already there in existing strategies, isn’t it moving in the right direction anyway and wouldn’t the interrelationships be recognised at some point?

To some extent, this is true, there is an emergent overall strategy overarching the plethora of individual strategies. However, making this explicit in a form that can be easily communicated to stakeholders encourages the joining up to happen in a timely and effective manner. There can be more confidence that playing your part won’t be wasted since other parts of the system will be doing what’s necessary to promote the overall objectives.

If these elements are happening anyway, with this approach merely articulating them in a coherent package, why does it need a 10 year strategy?

These initiatives will take a number of years to implement and then for the benefits to be felt. That means that initially, there will not be savings, and costs could even rise, before emerging into a new, improved, sustainable future. Recognising this from the start and having an idea of what sort of range the timescale and changes may fall into, together with a cross-party and cross-stakeholder approach, should support the initiatives being sustained even during difficult times.

Rather than being too ambitious, this isn’t ambitious enough. It has nothing to say about mental health, early years, vulnerable groups or health inequalities.

While those things are not highlighted in this presentation of the approach, they would be very much be part of it and should be mentioned in the full, detailed strategy. There could also well be strands of work within each PCN addressing these issues. Fundamental to this would be the use of targeting and proportionate universalism. The initiatives undertaken should be open to all but greater attention should be given to those most in need. There would also be a prioritisation of work with those where it could make the most difference, such as early years, ‘troubled families’ and people with long-term conditions.

Another answer to that question is that this is just one of many possible strategic approaches that could be taken. Many of the underlying elements will be common to different strategies but they may have a focus and emphasis on different things. This is in part to enable the production of a summary of the essence of the strategy that can be communicated to, and be understood and valued by, the public and other stakeholders.  However, different possible strategies may also focus on different parts of ‘the system’ (e.g. acute care, community care, self- and mutual care, social determinants) or drivers of change (e.g. technology, system design, behaviour change or prevention).  Spending time working through options with the public and other stakeholders should produce a much wider array of possibilities than those suggested here.

About the author Adrian Barker

One thought on “A possible JHWS – A local, integrated, whole-person-centred model”

This site uses Akismet to reduce spam. Learn how your comment data is processed.

Disable these demo widgets by adding your own widgets or from `Customizer > Layout Options > Miscellaneous > Disable demo widgets`.

Lorem Ipsum is simply dummy text of the printing and typesetting industry. Lorem Ipsum has been the industry standard dummy text ever since the 1500s

Dummy text variations of passages of Lorem Ipsum available, but the majority have suffered. If you are going to use a passage of Lorem Ipsum.

Alteration in some form, by injected humour, or randomised words which dont look even slightly believable.